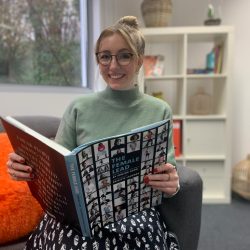 Read for Good’s Holly McSweeney revels in The Female Lead’s stories of inspirational women; each with a history and a success to be shared.

When The Female Lead landed at the Read for Good office not too long ago, it was met with complete awe from the team. And when I first unfurled its pages I intended only to glimpse at what it had in store, thinking I’d fully read it at a later date when I had more time. However, with one turn of the page, I couldn’t help but stop in my tracks, slowly and carefully taking in the stories with indistractable attention. The introduction tells how Edwina Dunn’s non-profit project aims to ‘make women’s stories more visible’; it does this with triumphant success. Not only does The Female Lead showcase the achievements of women, but it holds space to honour the process of becoming, we don’t only see women in their success, but we learn how they arrived there.

The Female Lead: Women Who Shape the World is a change-making and radiantly undeniable collection of the stories and successes of sixty ambitious ordinary, and yet extraordinary, women who have shaped the world in which we live. Ranging from political activists to teachers to the first female New York City firefighter, this book gives young girls the role models that truly reflect the possibilities they can achieve. When you see someone like you in a position you had only dreamt of, the opportunity becomes much more real. The Female Lead shows girls around the world that there are already so many women, who once were girls just like them, who are there, in diverse positions and places transforming the world as we speak.

This book is timely and urgent.

The Female Lead is a striking book in every single way. From Brigitte Lacombe’s stunning, simple, powerful photography to the stories shared in each woman’s own words. What was most striking though was the question this book stirred, one that lulled at the back of my mind and then echoed louder with each woman’s story: why have I not heard this name before?

‘Name an inspirational woman’ is a question that tends to come up at some point or other during school years, and we quickly revert to a short list of well-known, recognised, mostly historical figures (which I’m sure have already popped into your head). But, as The Female Lead proves, to keep to this list is to limit ourselves.

The book’s cover of snapshots made me think of windows, in each one a woman with a story, a history and a success to be shared. And the book itself is a feat of architecture, it stands resolute and unwavering. An ingenious touch within The Female Lead is the mention of a personal object that has a significance to each woman. This clever idea brought an unexpected dimension to each interview, an extension of each woman’s story in a beautifully intimate way – inviting us into their home or history. If this collection is a building, the objects are a pathway to each woman’s own individual space.