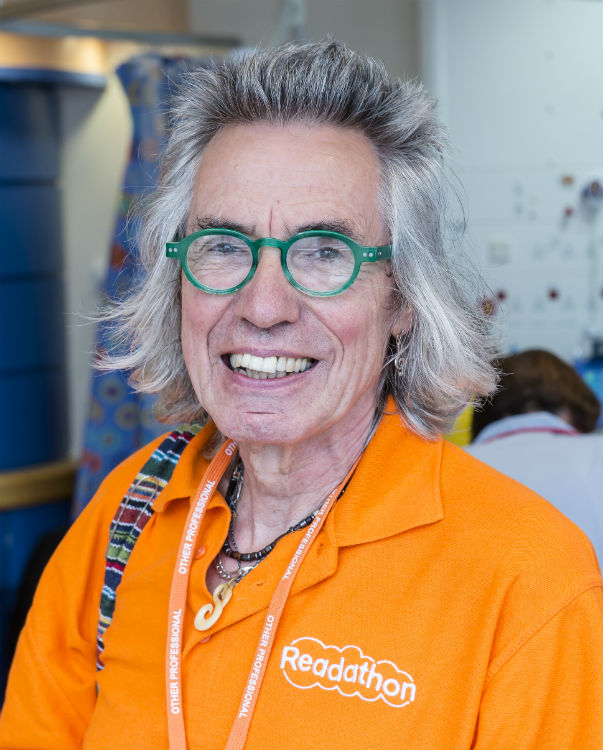 A story by Amelia with Readathon storyteller Graham Langley

Once upon a time in a distant land there lived a beautiful bird. She was a princess of birds and her feathers were bright blue and red.  Her palace was in a tall pointed tree in the middle of the woods ant it was surrounded by other similar trees but the princess’s palace was the tallest. She would hop from branch to branch and from the top she could look out over the whole woodland.

There was a whole flock of birds who looked after the princess but none of them were a beautiful as she was. But the thing about this princess was that she was mean. In particular she was mean to all of the servant birds. She would shout at them and boss them about and never gave them any food. They would have to fly off in their spare time and search for food themselves.

One day they were all startled by the sound of something crashing through the trees. It was a monster wheeled truck that belonged to the woodcutters.  Then they heard a terrifying screeching as the chain saw was started. One by one the trees toppled over and crashed to the ground until the only tree left was the princesses palace.

“Help me! Help Me!” sang out the princess but all of her servants flew away. The princess had always been so lazy that she had never learnt to fly. The man who was cutting down the trees stopped and listened to the bird. To him the cries of help from the princess sounded like the sweetest birdsong he had ever heard.

He called to her, “Come down little bird. Come down to me.” He held up his finger like a perch and the princess hopped from the branches and onto his finger. “Well” he said, “I think I had better take you home to safety.” So he took her back to his house and put her in a cage. Every day he gave her food and she filled the house with birdsong. It was a beautiful sound and he always thought that it was happy singing but it was really the angry song of the bird princess.

Filed under: Storytellers, Uncategorised Tagged with: