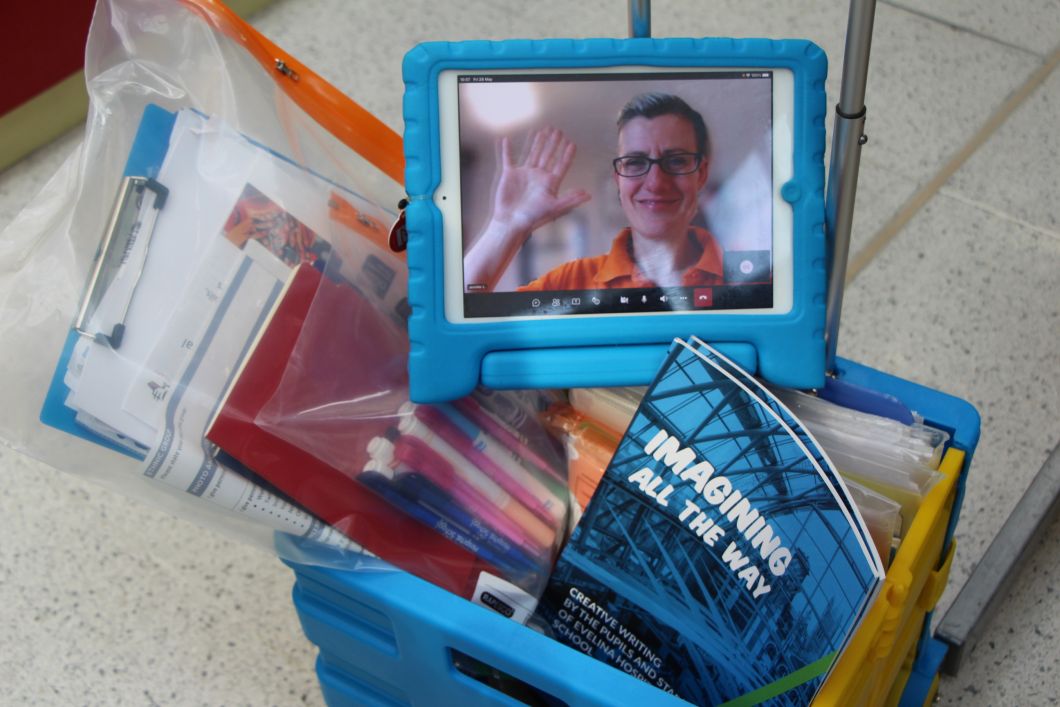 Tales from the IPad

Tales from the IPad

Back in January 2020, I visited four children’s hospitals in the space of eight days, in London, Bristol and Brighton. Travelling on tubes, trains and buses, wearing my bright orange Read For Good polo shirt, and carrying a notebook and a bag of story dice. I delivered books, told and listened to stories and chatted to children, parents, nurses and teachers. But, sat on the floor of a ward in Bristol with a gorgeous toddler reading Michael Rosen’s We’re Going on a Bear Hunt I had no idea what the next sixteen-plus months would hold for us all, or how long it would be before I would be back in that orange t-shirt.

I always tell people that my work as a storyteller in children’s hospitals is my most important and favourite job. And as everything fell away at the start of March 2020, it felt like one of the hardest things to let go of. I missed the brilliant conversations I would have with everyone I met. I missed telling stories which would elicit gasps or groans or giggles. And I missed listening to the wonderfully imaginative stories told to me by the incredible kids, many of whom had sworn they couldn’t make up a story just minutes earlier! But alongside what I was missing, I felt for the children still having to be in hospital. Being in hospital at any time can be tough but in the midst of a pandemic, I can only imagine the stress for both the children and the parents. It felt so hard not to be there to help lift spirits, provide escape, or through the creation of stories, to offer a chance to process some of what was happening around them.

And then, as if by magic, four hundred and ninety-two days later I was finally donning the orange t-shirt again. And thanks to the wonderful staff at London Evelina Children’s Hospital School, I was back on the wards – this time being pushed around on a trolley waving out of an Ipad!

The night before I had been nervous about how sessions might work without being in the room with the children. Would I be able to pick up on things in the same way? Would jokes still be funny? Would we be able to create stories together amidst digital delay and wifi glitches? Would it feel the same? But I needn’t have worried. Due in huge part to the brilliant teachers supporting the sessions, it was great! I saw old friends and new faces. We created fabulous stories of monster trucks, sharks, dragons, witches, magic hammers and even a child-eating trickster. We discovered characters overcoming challenges to get something they missed or were dreaming of, characters finding ways to solve seemingly insurmountable problems.

But as the dragon of fire and ice crept out of the dancing witch’s house with the hammer she’d been hiding, it felt like possibility was returning and through stories we were looking forwards to the future.

And it was joyful! So brilliant to be back.