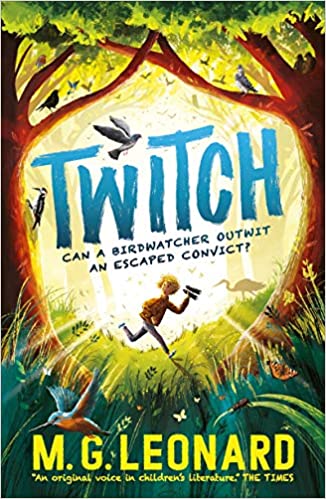 It’s the start of the summer holidays and Twitch, a rather singular little boy who sleeps in a bird-box bed, is looking forward to spending time in his secret hide, deep in his local nature reserve. However, as the police invade the area searching for an escaped convict, Twitch becomes embroiled in an adventure which also sees him learn about trust and friendship.

M.G.Leonard continues her highly successful run of middle-grade novels with this first in a new mystery adventure series. As with her previous books (Beetle Boy and the Adventure on Trains series), this is a clever, enjoyable take on a simple storyline that children will love.

The originality of having a keen “birder” as the protagonist makes us willing members of the bird-world where we can learn to differentiate between the songs of the dawn chorus as well as how to train a pigeon!

The ending is a delightful, chaotic melee of old-fashioned comedy made all the more poignant as Twitch finally discovers how sweet the world is with human as well as feathered friends.