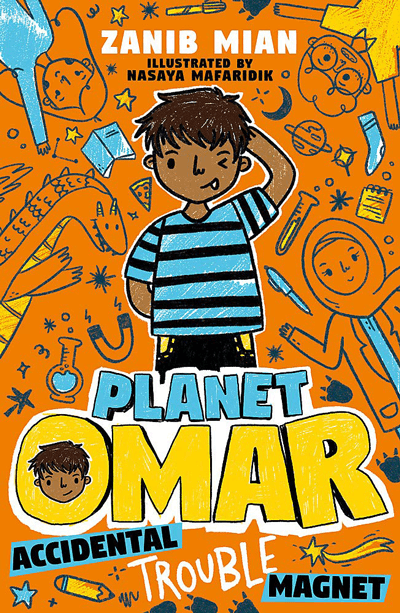 We know that publishers of children’s fiction strive to reach today’s children with titles that reflect both the ethnic and cultural diversity of today’s society, as well as the issues which affect them. Zanib Mian’s artful debut middle-grade novel Planet Omar: Accidental Trouble Magnet deftly winds together threads of casual racism, playground bullying and a child’s attempts to demystify adult behaviour. It’s a page-turner that manages to be both entertaining and completely relatable; Omar is a boy whose fears of moving to a new area are realised when the school’s bully turns on him and a neighbour reacts with hostility to the new Muslim family. Omar’s inner narrative about his family’s bid to beat prejudice with warmth, imagination and empathy, is brought to life by Nasaya Mafardik’s buoyant Tom Gates-style illustrations. We were delighted to get this feedback from a 12-year-old girl in hospital, after she discovered this book on the Read for Good bookcase. ‘I loved Planet Omar because the main character is a Muslim like me. He got bullied for his religion but even though he was bothered he didn’t fight back. I liked it so much that I finished it in one day.’ This book has inclusivity, diversity and empathy a-plenty, plus it’s compulsive reading. What more could we ask for?