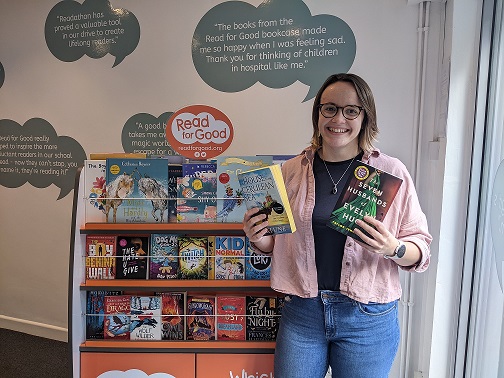 The power of YA books for identity

Part of what I love so much about books is their power to immerse you in incredible new worlds, but I also find comfort and inspiration in the everyday magic of stories allowing you to feel seen, represented and understood. As a ‘tomboy-ish’ little kid I loved reading about cheeky, bold, brave girls in Jacqueline Wilson’s books; as an adult I love strong, female characters penned by women writers.

For feeling represented as a bisexual woman, it’s young adult fiction I turn to time and time again.

I started to explore my identity when I was about 11 or 12, and at the time I was consumed by the world of comics, fanfiction and, of course, young adult fiction. The comfort I found in those chapters has stayed with me and shaped me, forming my understanding of myself. For young readers, books are more than just the stories they contain – they teach you about new experiences and identities, they provide comfort and strength to overcome adversity, and they let you know that there are characters out there just like you. I love Read for Good’s ethos of championing children’s choice and providing diverse, good quality books because it was choosing books in which I felt seen as a young person that has given me the confidence to stand as the bisexual woman I am today. Stories can, and do, transform lives.

So, here are some of my favourite books with LGBTQ+ themes that are suitable for young adult readers.

Heartstopper is a graphic novel that started its life as a webcomic, and it tells the story of two schoolboys, Charlie Spring and Nick Nelson, as they meet and fall in love. Their stories are told with such warmth and understanding, acknowledging the adversity they face but presenting them as more than just ‘labels’. One of the main characters, Nick Nelson, comes to terms with his bisexuality in the series, and his story is so lovingly told. Heartstopper’s recent success as a Netflix show felt momentous, and the tenderness with which Nick’s mum (played by Olivia Colman) accepted him after coming out brought me to tears.

The Long Way to a Small, Angry Planet – Becky Chambers

Lovingly described as “queer domestic sci-fi”, Becky Chambers’ Wayfarer series of novels is a breath of fresh air. The first book of the series, The Long Way to a Small, Angry Planet, sees a cast of characters through a space-faring adventure. With Chambers herself being an openly gay writer, and the characters embodying various sexualities and diverse genders, the people that exist in these pages felt like an affirming, warm community that I was desperate to be part of.

Lumberjanes is a fabulously illustrated series of comics, following a group of young girls through a weird and wonderful alternative scout summer camp, meeting supernatural threats along the way. This gang of girls has an ensemble cast with a transgender character, a teen with gay parents, and various other intersections in the LGBTQ+ community. These comics are fun-filled, silly and full of female empowerment.

The House in the Cerulean Sea – TJ Klune

The House in the Cerulean Sea tells the story of Linus Baker, a man who travels to a supernatural orphanage to assess (as is his job) the risk the children pose to the outside human world. Whilst there, he develops an unlikely relationship with the headteacher, Arthur Parnassus, who will fight for the safety of the misunderstood children in his care. This book not only contains openly gay characters, but the children themselves (charming and hilarious) feel like an allegory of the power of found families and communities for LGBTQ+ people. I felt understood and seen amongst these pages.

Although not strictly a YA book, the Seven Husbands of Evelyn Hugo has skyrocketed to fame through the app TikTok. TikTok’s book community, #BookTok, have raved about this book and brought it to the attention of adult and young adult readers alike. Evelyn Hugo’s efforts to defend her own bisexuality against accusations of being ‘gay’ or ‘straight’ based on the gender of her partner felt achingly familiar. I love the rich character building in this novel.

Whilst these are just a handful of my favourites, I hope every young person who is discovering something new about themselves can find and choose books that represent them. Seeing yourself in the pages of a book is a transformative experience, and one which can last a lifetime.